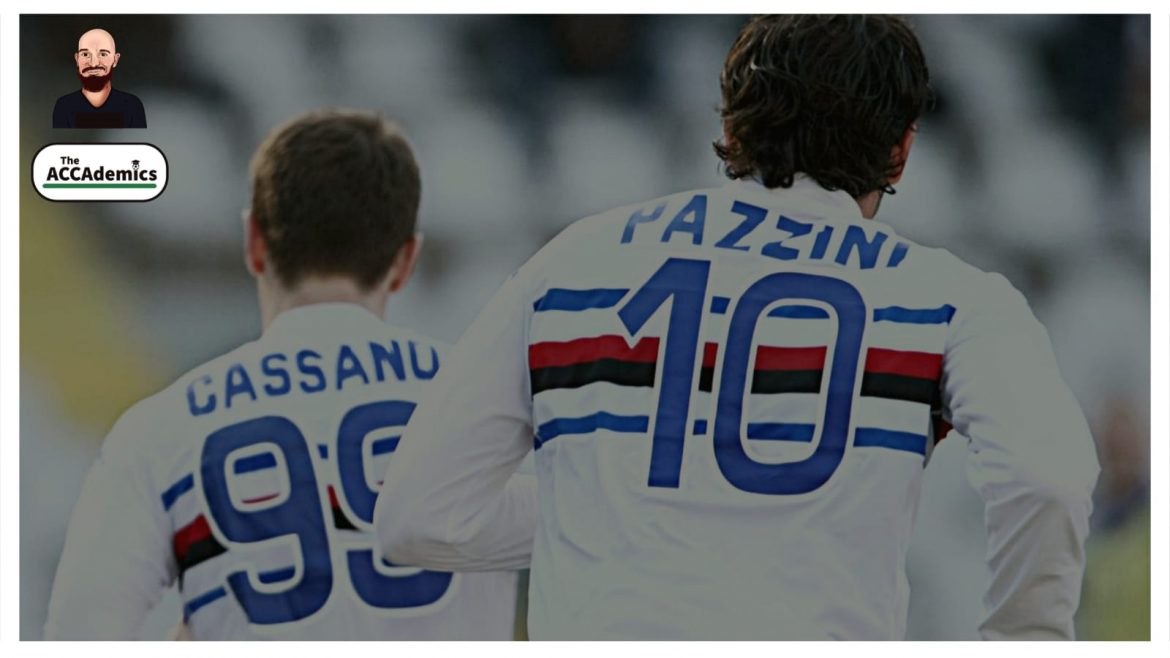 Italian football has been graced with many great attacking double acts over the years. Rui Costa & Batistuta, Ronaldo & Vieri and Maradona & Careca to name a few have all dazzled the peninsula but unfortunately, I was not around to witness some of the greatest. Below I share the top three Serie A strike partnerships from my living memory along with some honourable mentions.

Pazzano was one of the most potent and exciting strike partnerships in the history of Italian football. The duo were constantly compared to the pairing of Mancini and Vialli who had been instrumental in winning Sampdoria’s first and only Scudetto in 1991. With an almost telepathic understanding, Pazzini’s clinical finishing and reading of the game was the perfect foil for Cassano’s guile and creativity. Over the course of two seasons they produced a total of 65 goals, 44 for Pazzini and 21 for Cassano.

Even though Pazzano didn’t manage to bring home a second league title they did propel Sampdoria to the Champions League qualifying stage and a Coppa Italia final. Incidentally, Jose Mourinho has a lot to thank them for. On matchday 35 of the 09/10 season Pazzini, set up by Cassano, netted twice to beat Roma 2-1. This allowed Inter to overtake the Giallorossi in the table which in turn paved the way for the Nerazzurri’s historic league, cup and Champions League treble. In 2011, following a row with Sampdoria’s Chairman, Cassano was banned from playing with the first team. This incident was the beginning of the end for the deadly duo. The following January both players parted ways and left for opposite sides of the fashion capital. Cassano moved to AC Milan and Pazzini joined city rivals Inter. Ironically two years later they were involved in a swap deal between the clubs after suffering disappointing seasons.

Neither player could ever replicate the form they had shown at Sampdoria as both were proven to perform best as big fish in small ponds. Cassano’s petulance, fitness and attitude problems that had hampered him throughout his career continued up until retirement while Pazzini’s need to be the focal point of an attack was not always feasible at a large club where an array of attacking alternatives was available.

A reunion at Hellas Verona for the 2017/18 campaign was on the cards but unfortunately it was not to be. At the last minute Cassano scuppered the deal, after already having signed a contract, and decided to hang up his boots for good.

The 2012/13 season was a frustrating one for Torino. After a points deduction and a fine for the clubs involvement in Scommessopoli, il Toro finished in 16th position just seven shy of being relegated. Cerci and Immobile had been at the club for the campaign and neither had overly impressed. Immobile only managed a measly 5 goals in 13 games whereas Cerci’s numbers were slightly better with 8 in 35 appearances. Following the summer departure of star striker Rolando Bianchi, then manager Giampiero Ventura, rather than buy a new frontman, decided to move Cerci from his traditional right wing position to a more forward one alongside Immobile. The result was one of the most devastatingly effective partnerships Serie A had ever witnessed.

Immobile ended the season as Capocanonniere with 22 goals while Cerci topped the assists chart on 11. He also chipped in with 13 strikes of his own. Torino eventually finished in 7th place, a point off the final European spot. However, thanks to Parma failing to obtain a licence, il Toro snuck into the Uefa League for the first time in 19 years.

Sadly, the partnership only lasted a year and neither player stuck around for Torino’s continental adventure. Immobile and Cerci’s performances earned them high profile moves abroad but their fortunes would be wildly different. After two underwhelming spells at Dortmund and Sevilla, Immobile returned to the peninsula and won the Capocanonniere title a further three times with Lazio and a European Championship with Italy.

For Cerci, his time in Turin would be the pinnacle of his career. His big move to Atletico Madrid was a total failure. He only made eleven appearances for the club and was loaned out twice to Milan and Genoa. From there it was a slow slide down the divisions interspersed with a stint in Turkey. Cerci eventually finished his career at age 33 playing with Arezzo in Serie C.

The former Fiorentina frontline of Batistuta and Rui Costa is a tough one to top but the legendary combo of Luca Toni and Adrian Mutu comes mightily close. Toni was arguably the best striker of his generation and Mutu one of the most naturally gifted attackers in world football at the time. Together they scored 16 goals apiece and guided Fiorentina to a 6th place finish, which included an 11-game unbeaten run and Uefa Cup qualification. This might not sound overly impressive for a club of La Viola’s stature, but the Tuscans had begun the season on -15 points after being embroiled in the Calciopoli scandal. Without the deduction they would have ended the campaign in 3rd. After just one season together, Toni was snapped up by Bayern Munich in a big money move. He already held a World Cup winners medal and the title of Capocanonniere thanks to a record breaking 31 goal haul but he would continue to add to his long list of personal honours. In 07/08 Toni won the Bundesliga, DFB Pokal and the Torjägerkanone with the German giants before less successful spells at Roma, Genoa and Juventus. At age 38, while playing with Hellas Verona he was crowned Capocanonniere for the second time becoming the oldest striker to ever do so.

Mutu would stay with Fiorentina until 2011, notching up 54 goals in 112 appearances. In terms of trophies his career was not as illustrious as his former teammate’s but it was just as memorable. Notorious for his bedroom antics, anti-doping run-ins and numerous bans, the poetry loving legal scholar retired in 2016 at ASA Târgu Mureș in his native Romania. He now manages Rapid Bucharest and is part of Fiorentina’s greatest ever XI.

A combined total of 79 goals and a historic treble under Jose Mourinho. Il Principe and Little Milla’s endeavours will always be remembered by the Inter faithful.

Two of the main protagonists of Roma’s third Scudetto in 2001. Despite often being used as a substitute, Montella had a habit of scoring important goals especially in derbies where he once scored 4 in a single match. Totti needs no elaboration.

Dzeko ended the 16/17 season as Serie A topscorer and broke the Roma record for most goals scored in a season with 39. Salah bagged 19 along with 15 assists. Truly phenomenal numbers.

Every week Enzo publishes his free Serie A betting tips and predictions here on The ACCAdemics.